Featuring a selection of works by six international artists, mor charpentier explores the entangled links between art and cartography, reconsidering the historical development of the discipline and highlighting the individual narratives that challenge the limits and shapes of the maps we know.

The link between artists and maps is as old as cartography, the discipline of translating into a flat comprehensive form the complexity of the surrounding territory. A map is first and foremost a tool of incomparable strategic value, but it is also a projection of the human understanding of the world, and it is interwoven with a set of conventions and ideological luggage. Yet, there is also a certain amount of artistry involved in the history of mapmaking. Not only the maps needed to be embellished as precious objects, but the very idea of turning the observation of the land —the reality— into a legible, useful, device —a representation— is particularly close to the traditional notion of the artistic process. Modern and contemporary artists, however, will discover the possibilities of a new cartography of the world that will highlight alternative focal points and will thrive in the strategies of detournement, such as the “Surrealist Map of the World”, published in the magazine Varietés in 1929, or Joaquín Torres Garcia’s famous drawing, America Invertida, of 1943.

Revisiting cartography goes hand in hand with a reassessment of History and the narratives that have constructed our time. Colonialism, Cold War, migrations, exploitation of natural resources and commercial imperialism are some of the tropes that we will commonly find in the work of contemporary artist dealing with maps. Some of them will address personal narratives based on individual paths and memories. As Michael Taussig puts it in Palma Africana —a “spiralling” essay about the Colombian swamps— when refering the efforts of one peasant facing palm oil companies occupation: “the state maps emit an aura of finality like a locked safe, whereas if you looked at Efraín’s maps (…) you were struck by meandering traces of histories at work in lands of collective memory. In a literal manner Efraín’s maps deterritorialize the state at its basic level, the lay of the land and the flow of its waters”. In a very similar way, both Bouchra Khalili and Rossella Biscotti offer a voice to the individuals forced to travel illegally that have crossed the Mediterranean to get to Europe, and explore alternative cartographies of the sea in which the lines of the borders are overruled by the paths of the human journey. Hajra Waheed’s Untitled (MAP), connects to her own background in a way which is common in her artistic practice, where the personal and intimate dialogue with the political on a global large scale perspective.

Many artists have been concerned as well with the mapping of Latin America, a continent defined by colonial conquest, revolution, and foreign political interference to seize political control. While the work of Voluspa Jarpa makes visible the European control of almost every territory around the world, Alexander Apóstol and Edgardo Aragón focus on modern forms of commercial and political domination over South America. In all of these examples, the viewer’s perception of reality and geo-political assumptions are challenged with unobserved facts and histories, and reimagined through the poetics of the artists’ gaze.

Produced between 2008 and 2011, The Mapping Journey Project is an installation composed of 8 single channel videos. This project aims to draw an alternative practice of map-making elaborated and shaped from the perspective of individuals forced to cross borders illegally. Each of the videos is based on one long static shot. A hand holding a permanent marker draws literally on a map the tortuous and complex roads borders that forced illegal journeys generate, while off-screen the narrators recounts factually the journey.

While literal maps are the central visual element of The Mapping Journey Project, they are employed only to be subverted. The blue water and multi-coloured countries that about one another become graphic abstractions as each protagonist draws lines across and through them. The borders between places are arguably the most important element to each character’s story —their defining antagonist— but the borders are also, as each speaker’s constant traversals imply, arbitrary, state-sponsored man-made obstructions. (…) Migration and travel are not simply tied to ideas of economic opportunity, exile or escape. Rather, they also refuse state control and pow- er, and the restrictions of nationalism, regionalism, and ideology. The smaller map, often ignored by critics in assessments of this work, is the sharpest indication of the arbitrariness and implicit subjugation of borders. 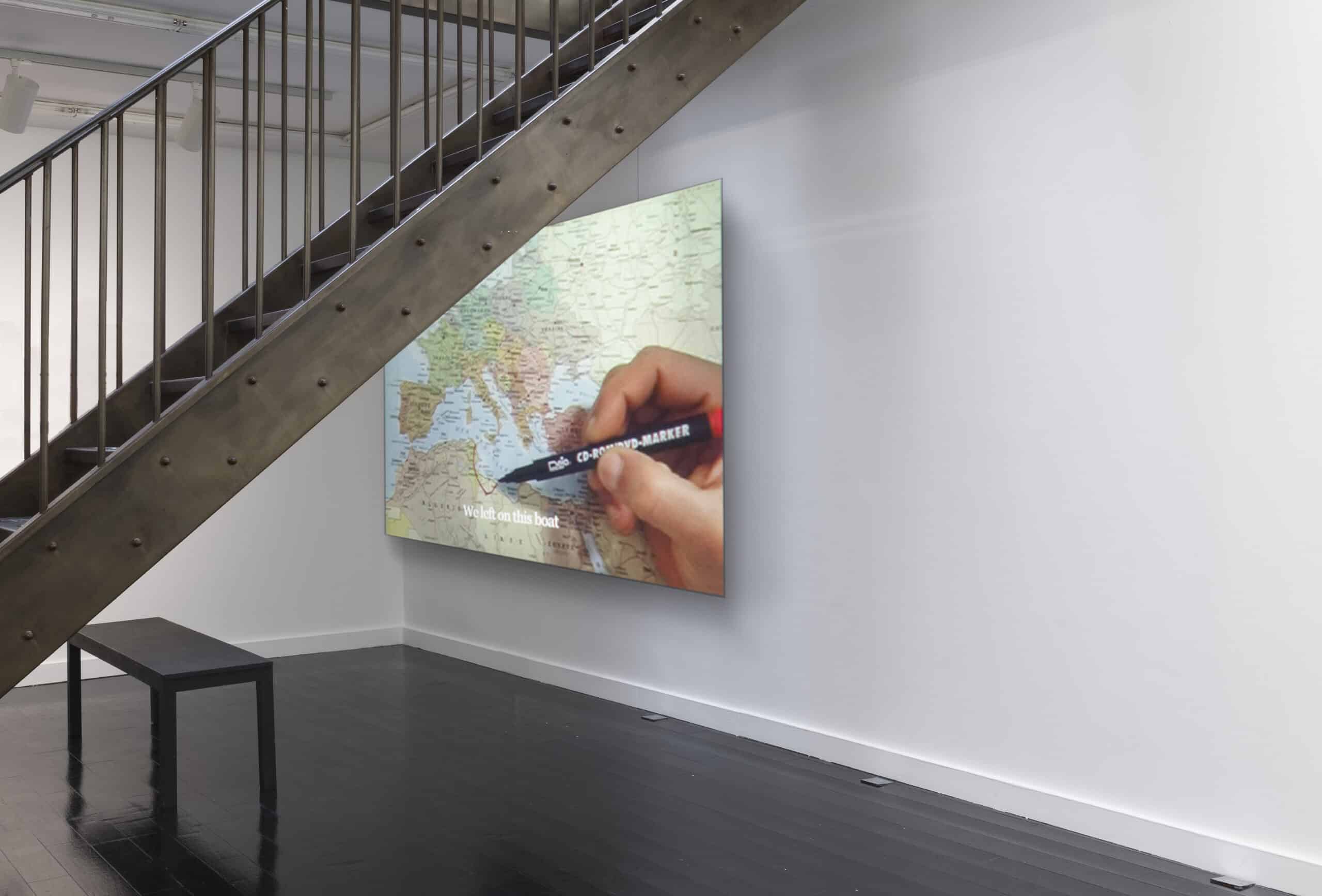 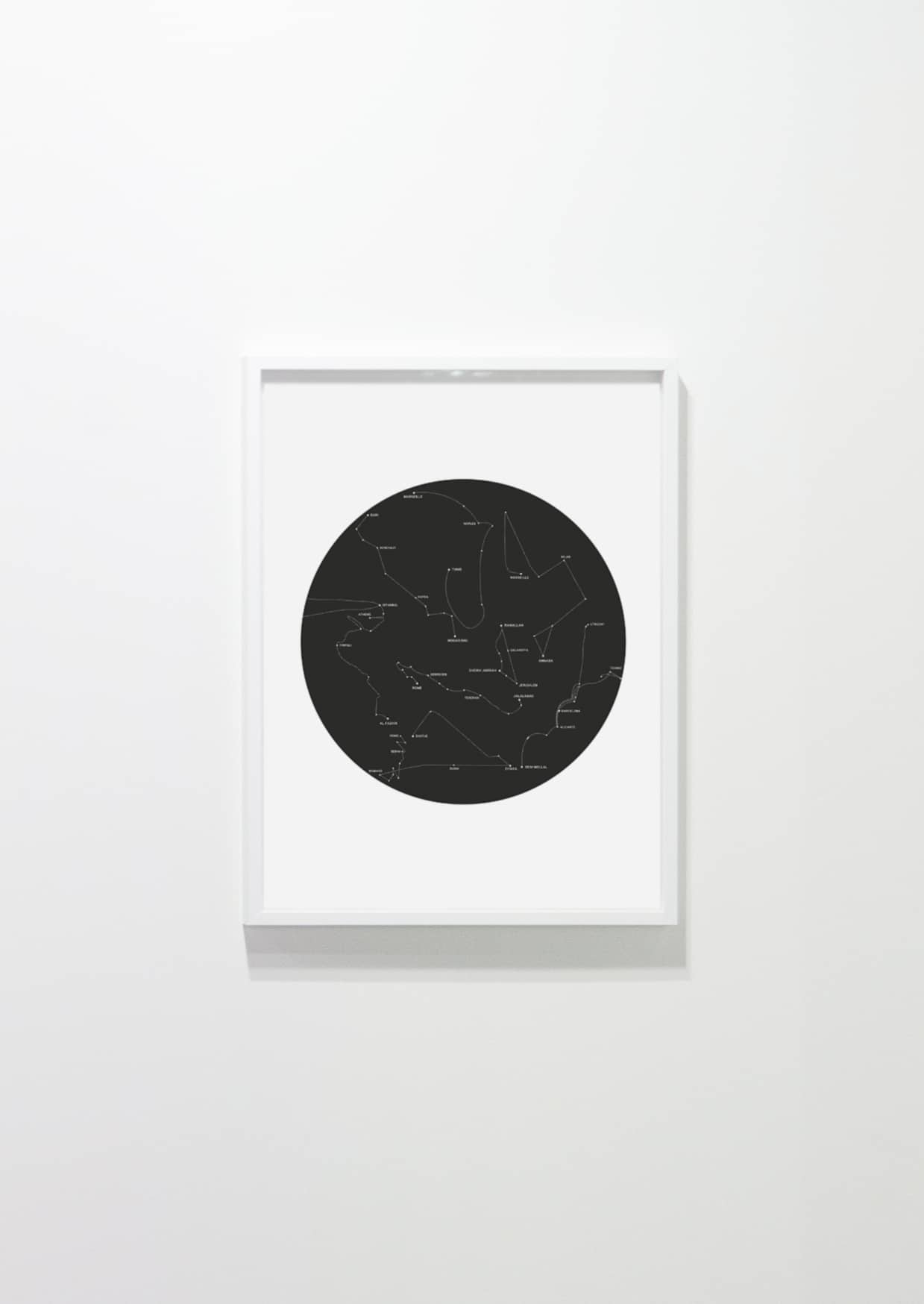 Sea as Sky first appeared in the New York Times on the 20th and 27th March 2018. Commissioned by the MoMA to be part of the Museum Edition of the newspaper, the work was accompanied by a legend and an Oscar Wilde’s quote: “A map of the world that does not include Utopia is not worth even glancing at”.

The specific spheric form of Sea as sky was inspired by the world map of Muhammad Al-Idrisi in the Tabula Rogeriana (c. 1154), considered at the time as the most accurate atlas ever produced. The most surprising about Al-Idrisi’s map is its orientation : it is literally upside down. Revealing a particular point of view, oriented from the Middle East and North Africa, the construction of the map also allow us to rethink geography as a political product, a mirrored reflection of power.

The different routes and city names indicated on Sea as Sky are coming from the series The Constellations (2011), where the journeys of different persons fleeing their country has been translated in a set of constellations. The silkscreen becomes the place where sky and sea are blurred, boundaries are erased and singular lives emerges as an alternative form of orientation.

The starting point of this project dates back to 2010, when Rossella Biscotti received the Michelangelo Award, during the XIV International Sculpture Biennale of Carrara. She won a 20 tons block of Carrara marble from the Cave of Michalengelo. Biscotti decided to make this block of marble travel from the quarries to the midst of the Mediterranean Sea where she will drop it overboard as a ready‐made.

The first part of this ongoing project focused on the identification of the block’s new location inspired by scientific research and oceanography. She analyzed in collaboration with different international and national structures the environmental complexity of the Sicilian Canal, both in surface and depth.

The Journey overlaps a various range of maps, surveys and samples highlighting historical commercial routes, migrant routes, artefacts and military deposit, analyzing the seabed in Interanational water between Italy, Libya and Tunisia. This seemingly simple action reveals the complex infrastructure and geopolitical situation of the area. 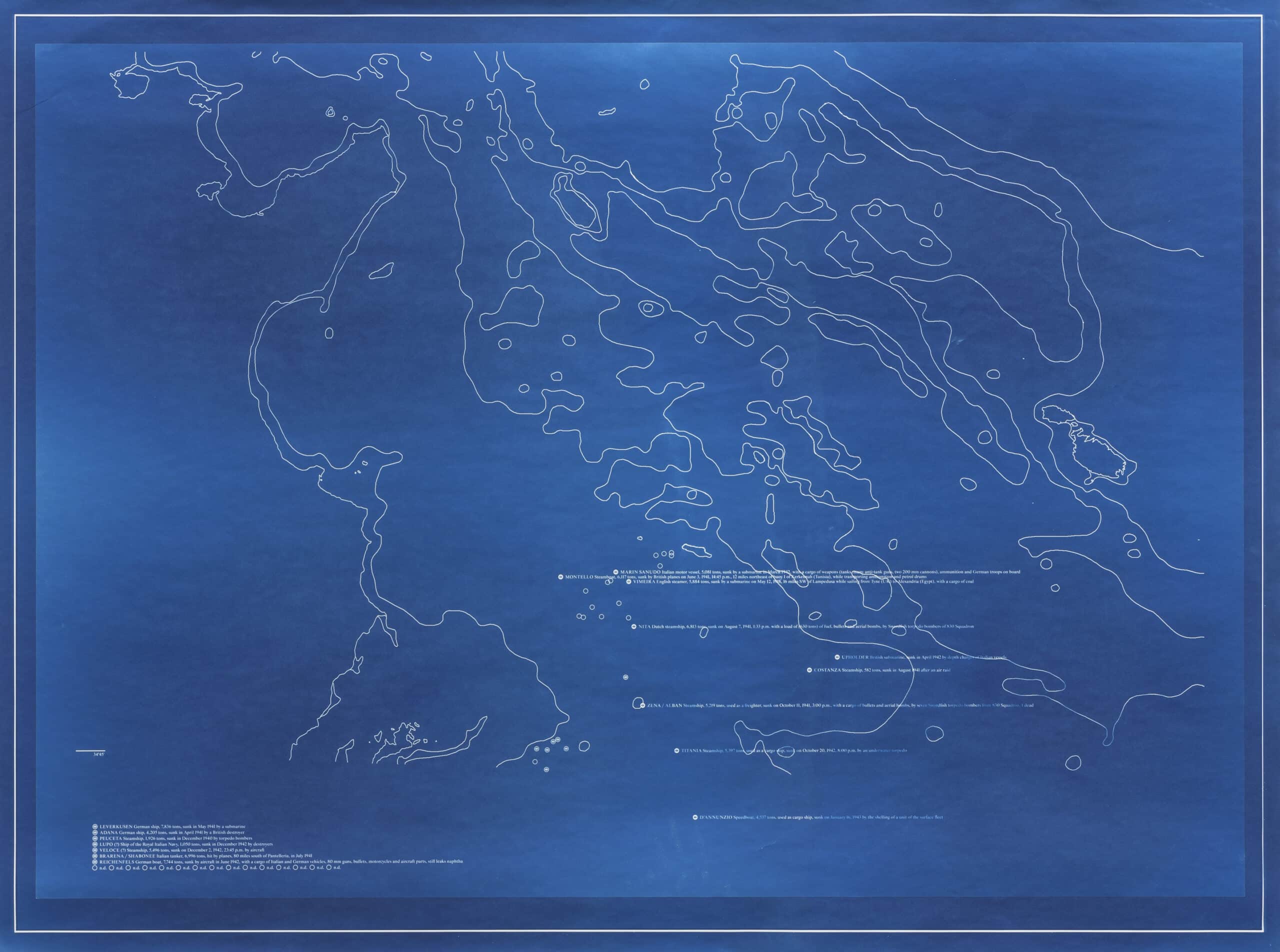 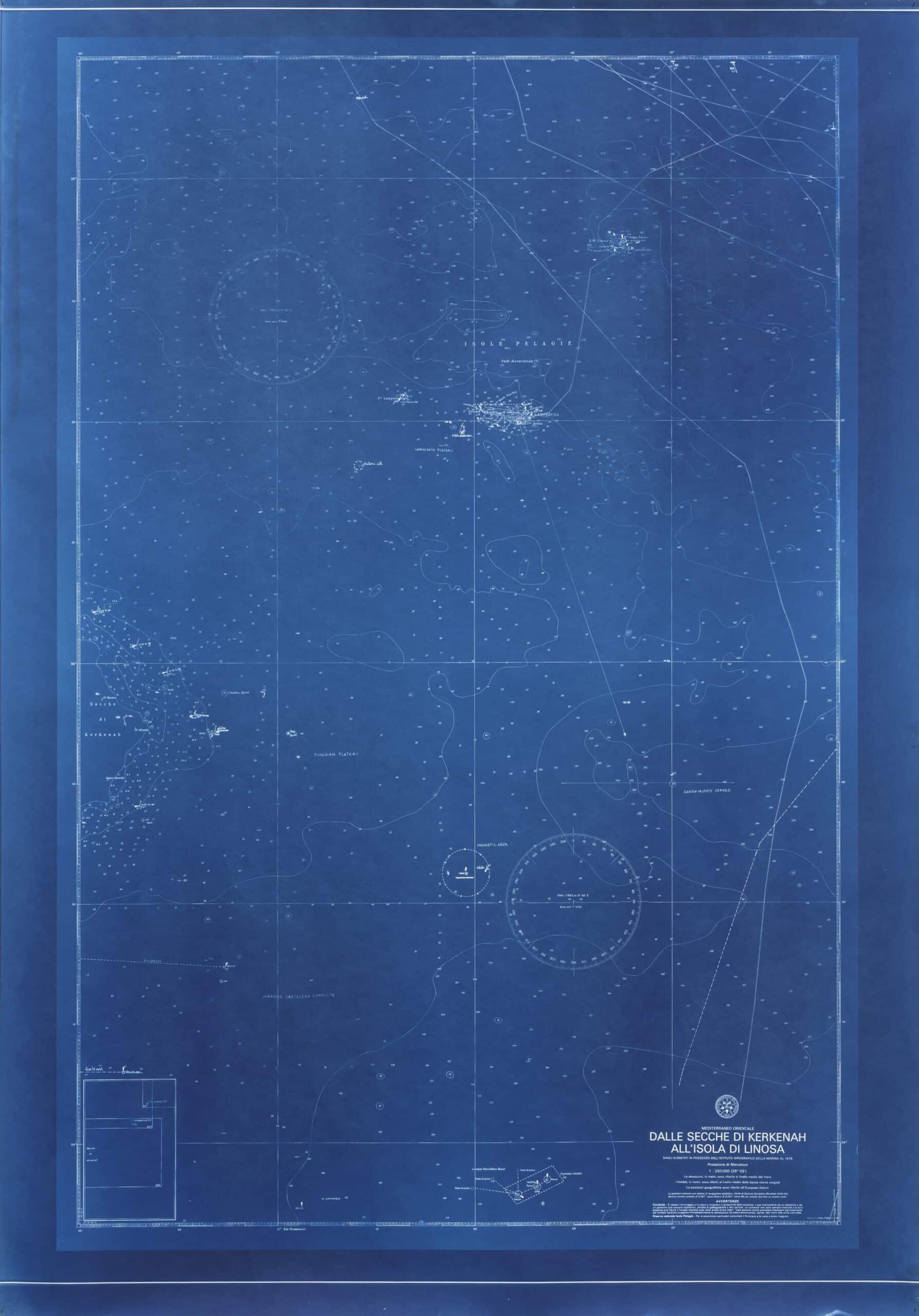 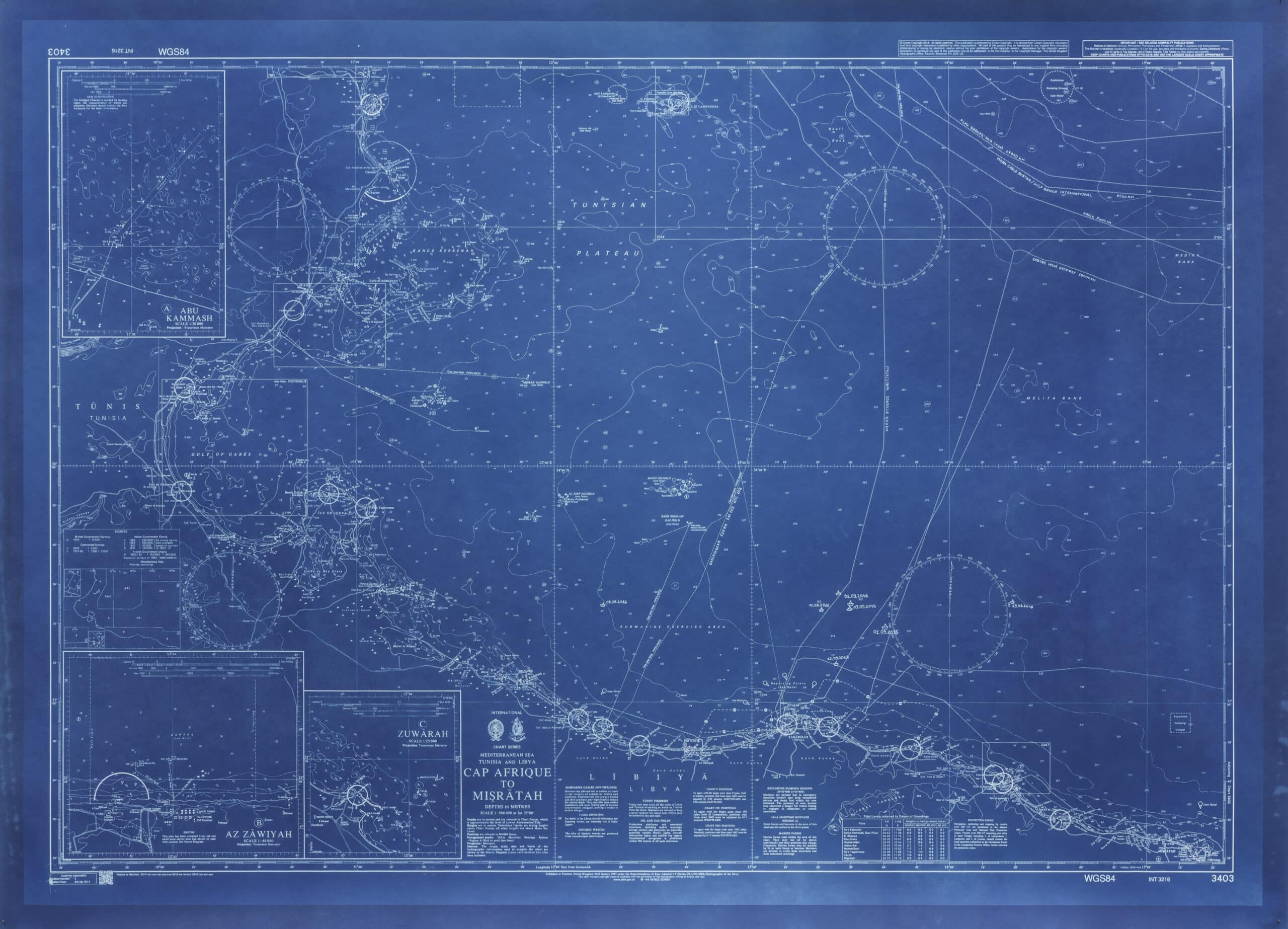 The Journey (From Cape Africa (Tunisia) till Misrata (Lybia), 2016

The Migrant Map is a police photograph taken in Lampedusa in 2011 from a migrant boat that reached the island while Biscotti was there for her research. This testimony brings us back to another current and tragical reality of this complex area of the sea. The Mediterranean Sea has become one of the deadliest migrations routes of the 21st Century. 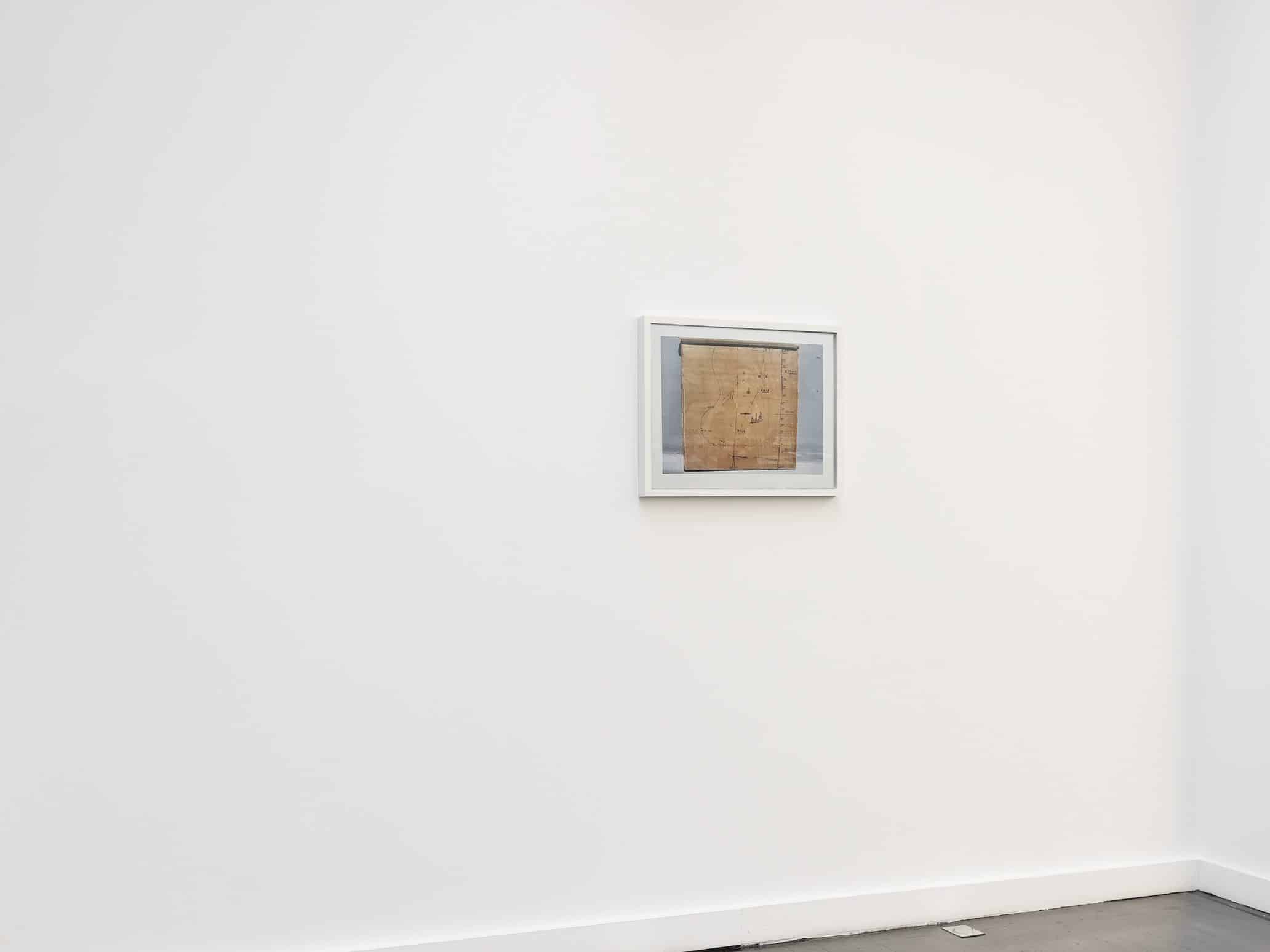 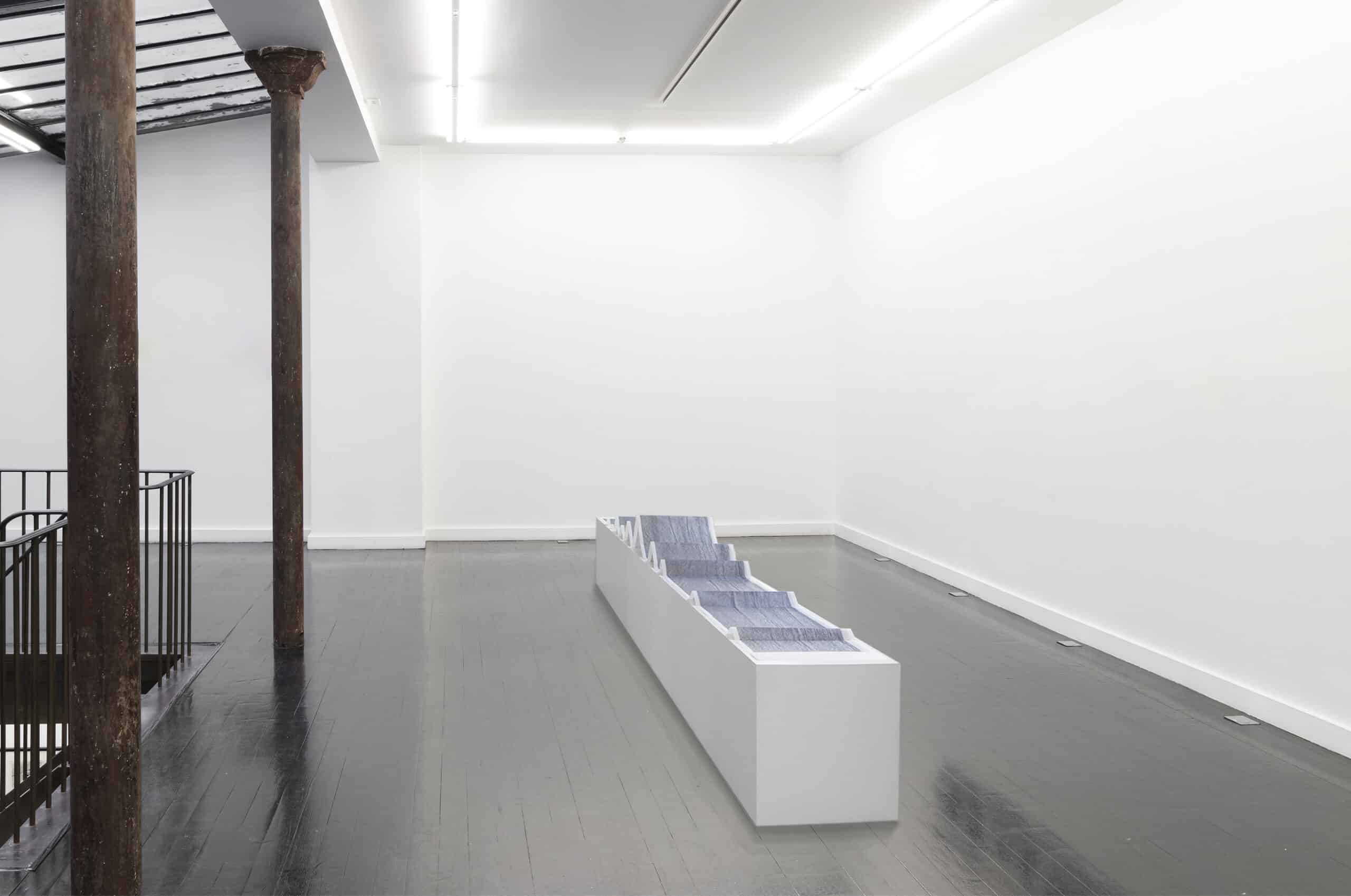 Untitled (MAP) is a classified map of the largest offshore oil field in the world, located 265 kilometres north of Dhahran, Saudi Arabia where the artist spent her youth. The work is altered, folded and elongated, suggesting a subterranean mountain range or an active pulse line at the heart of geopolitical warfare. Untitled (MAP) speaks to the fact that surveillance does not live solely on a horizontal plane or two-dimensional map, but manifests as a vertical occupation on a scale that reaches from satellites in the sky to far below the surface of the sea.

Similar to the peaks and valleys of an electrocardiogram, Untitled (MAP) communicates data as a field of pulses or heart- beats. Folds are used to determine a three dimensional plane, continuing Waheed’s preoccupation with folding as a way of challenging both scale and space. Just as Still Against the Sky 1-3 (2015) makes use of folded pages to transform a pocket-sized night sky into a boundless universe, Untitled (MAP) is a scaled-down representation of contested oceanic geographies. Both occupy the cross-section of cosmology and geography.

This map, depicting worldwide European colonial hegemony is one of the highlights in Voluspa Jarpa’s project for the Chilean Pavilion at the 58th Venice Biennale. It’s built out of different fragments of laser-cut, and hand carved, steel, copper and bronze. Each metal has been treated specifically to obtain a particular shade. The resulting color palette functions as a visual code to read the map: in golden oxidized bronze, Europe; in raw steel, the colonized territories, without any borders, just topographic relief; and finally, in copper with a green patina, the few territories that have never been colonized.

Through the jewel-like allure and exceptional craftsmanship of the piece, the artist conveys a very strong visual statement: very few parts of the Earth have escaped European colonialism. Only five countries haven’t been under European domination or political influence: Liberia, Thailand, Japan, North and South Korea. 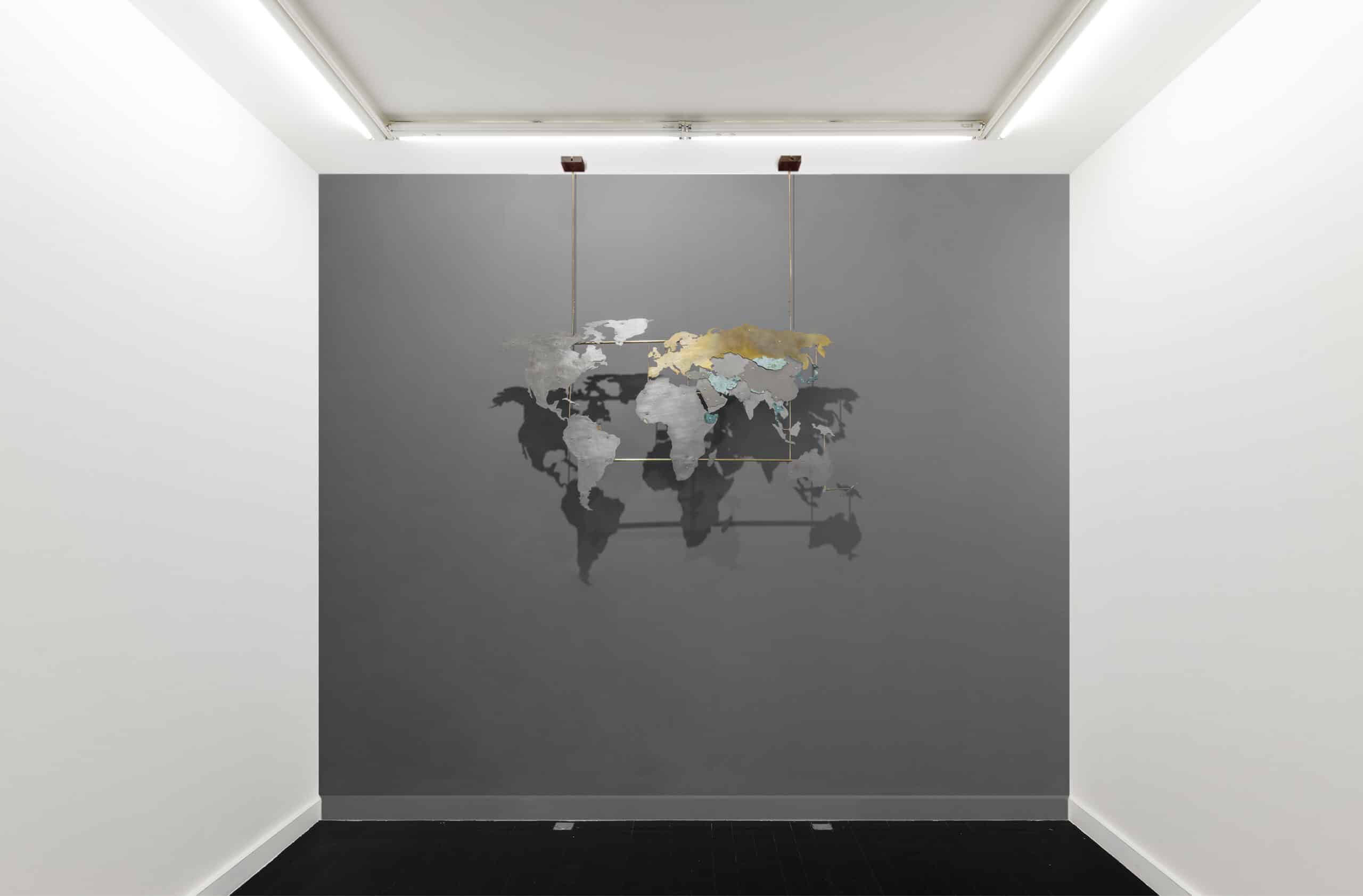 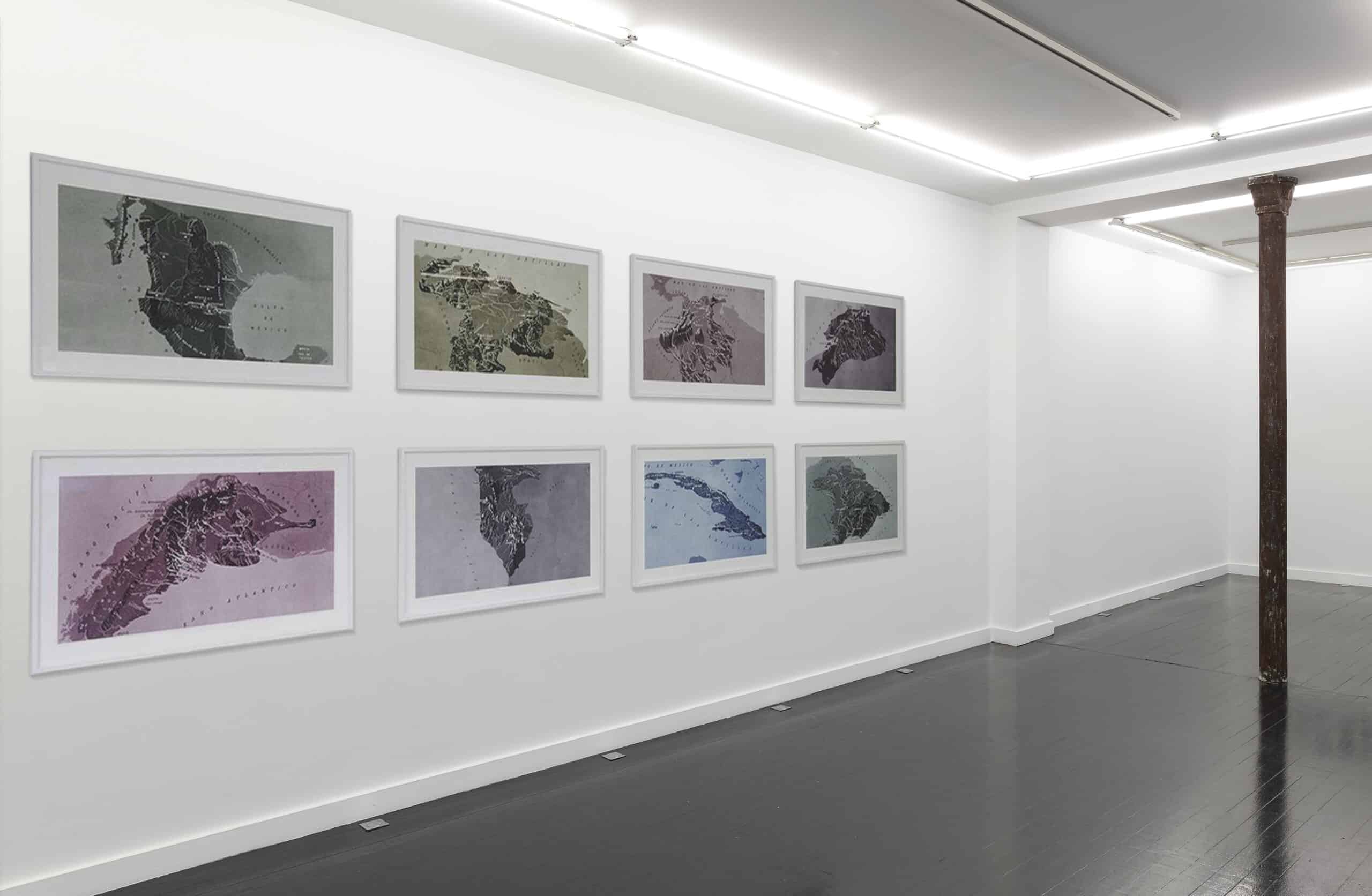 In the 1950s, under the Truman administration, the United States intervene politically in the local governments and structures of Latin America. The interpretation of a physical map ironizes on the possible instability of the region, with geographical features that can be read as political clashes. The maps chosen for this series are those of Brazil, Colombia, Mexico, Peru, Argentina, Ecuador, Cuba and Venezuela.

Edgardo Aragón’s ongoing series of maps was born as part of the project Mesoamerica: The Hurricane Effect, where the artist addressed Mexican and global economic and political systems, and zoomed in on their effects on Mexican communities. In the following works, the artist provides a critical cartography that shows the power lines that define international development projects and its effects on diverse communities in developing nations. 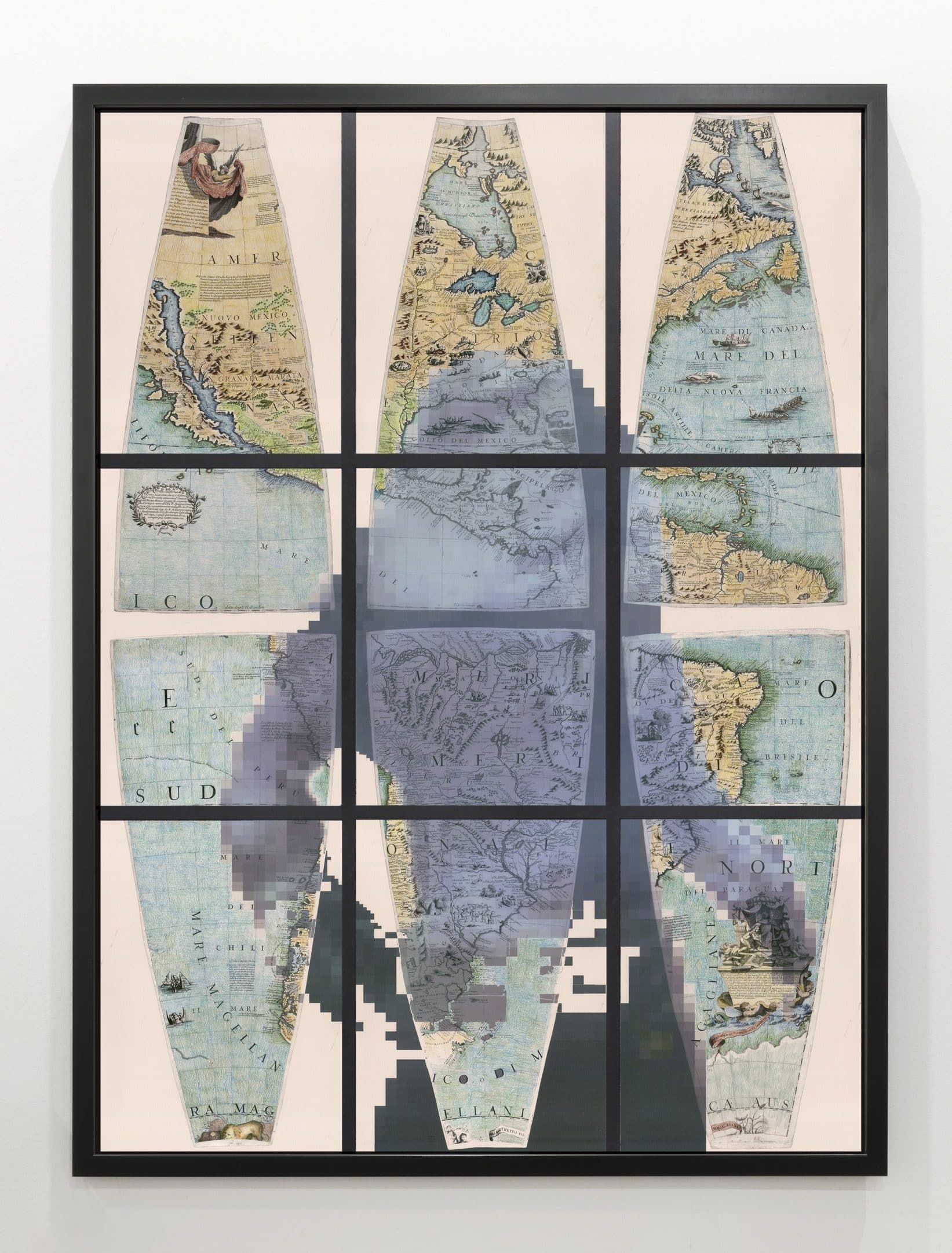 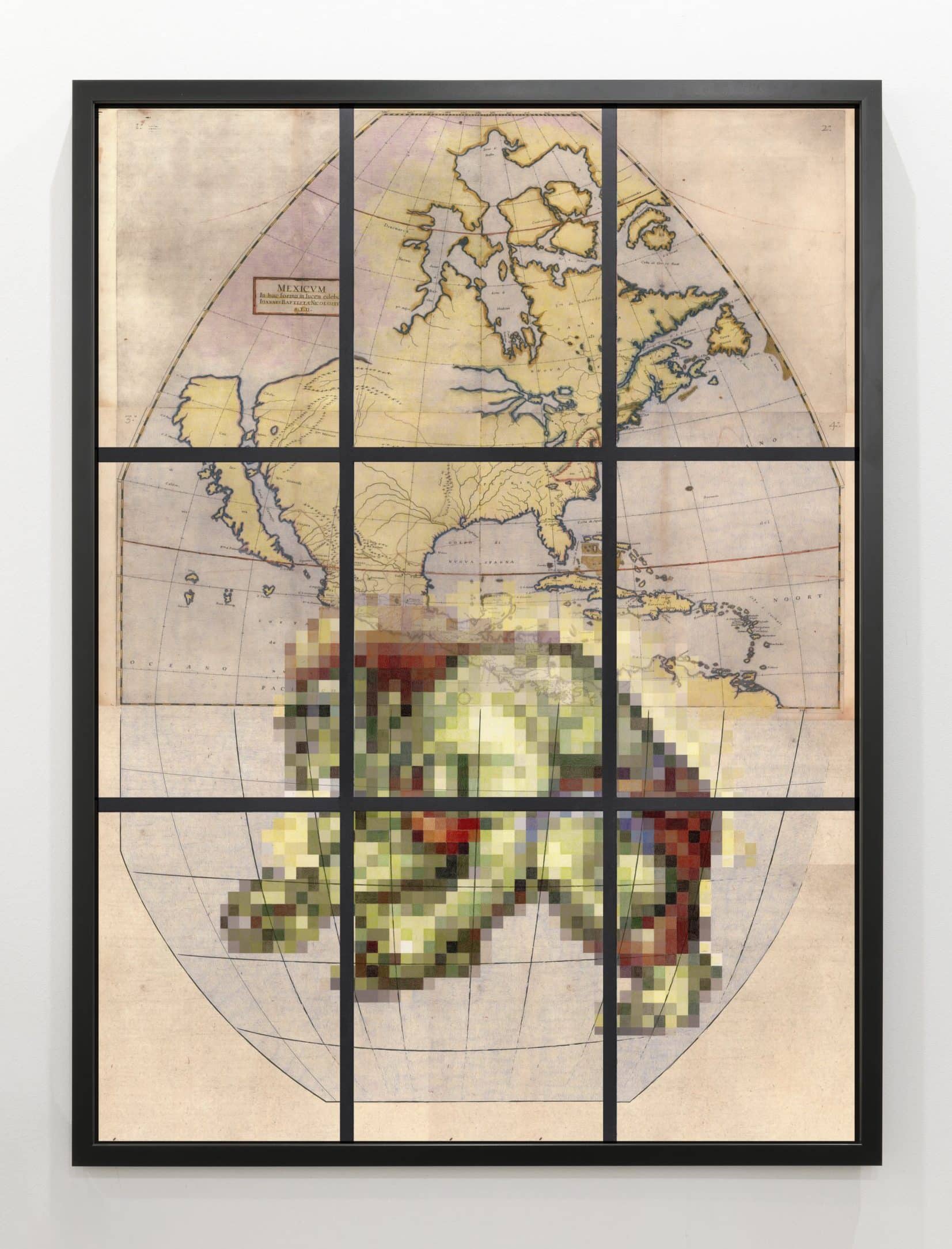 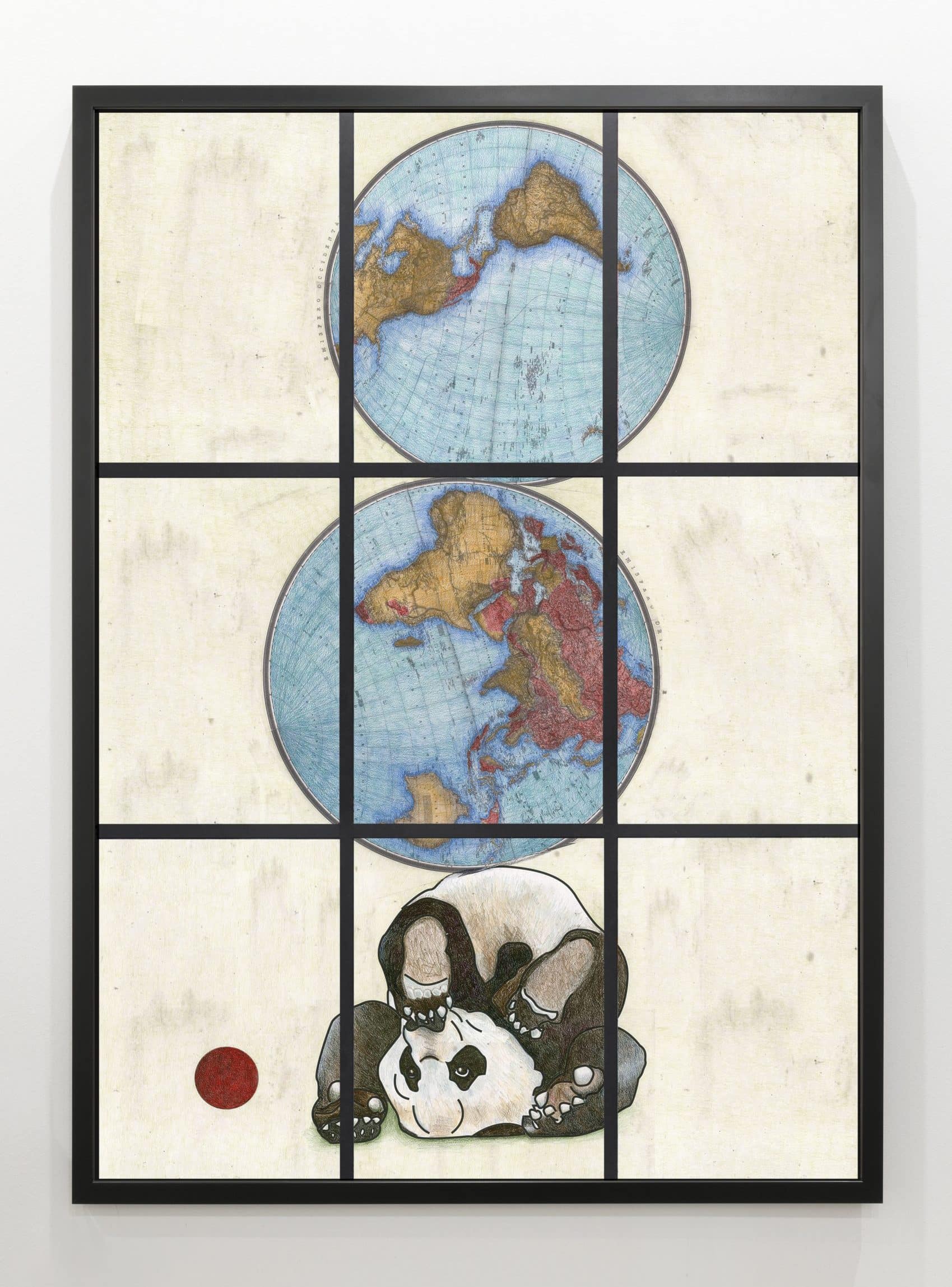