The long and successful career of Oscar Muñoz is punctuated with iconic artworks that have visually and conceptually defined his language as a creator. Editor Solitario is without any doubt one of these milestones —although not the only one— and has the particularity of being on its own a reflection on artistic practice itself. In this installation, the artist takes on the role of an archivist, endlessly reorganising a body of images in which the family album coexist with movie stars and the history of art. The constant reference to the playing cards, manifests the idea of chance and the abandonment to the random possibilities of a game. Nevertheless, the Surrealist conviction of an “objective chance”, taking active part in the creative act, should not be overlooked here. It occur to us that Oscar Muñoz resolutely cultivates the strategies that allow that objective chance to happen, and they are even inherent to his work. At the same time, and almost as a paradox, his practice is grounded in the tireless repetition of a process until the expected result is obtained. It is not so much about coming to terms with and accepting the accident as to pursue a certain control of the fate. If this exhibition reveals something, it is precisely the organic and mutable nature, nourishing in the course of action, of his artistic practice.

Surrounding a paramount piece as Editor Solitario II, 2011, appear a series of four small-size installations, referred to as intentos, or “attempts”. The importance of these pieces is fundamental in order to fully understand Muñoz’s work in a way that have not been contemplated before. That idea of the “attempt”, of “trying”, transcend the simple notion of a sketch, of a failed trial or a technical test in the studio; it implies the acknowledgement that the solution to the riddle that is sometimes a work of art, can be multiple, unaware of any hierarchy, and even that the answer might only come over time.

Indeed, time —or to be more precise, the perception of a long term temporality— is installed as well at the conceptual core of these works. The different intentos have been developed in a chronological frame of ten to twenty years, spanning from the initial production, until the moment when technical and conceptional conditions have permitted to give them the material form in which they are presented today. Likewise, time plays a central role in all of them, either in the way the face of Narcissus slowly sinks to the bottom of a water tank —Intento del jueves, 2010—, or the progress of photographic fixation/disappearance of the memory —6 Intentos (Biografías), 2001-2002—. But the most emblematic of all might be the never-ending cicle where the author tries once and again to draw a portrait using water over the sun heated concrete —Intentos 1 y 2 (Re/trato y Proyecto para un memorial), 2004—. It is an attempt to an imposible endeavour, bound to fail, yet repeated tirelessly in a gesture of resilience and determination.

We can’t help but think, while installing this exhibition, that it is loaded with symbolic elements that bear witness, more than ever, of ourselves and of current times. Initially scheduled to open in the fall of 2020, it should have marked the 10th anniversary of the gallery, recalling an inaugural solo show devoted to Oscar Muñoz. Forced by the circumstances —another form of chance—, we had to wait for the right time and to reinvent new forms of interaction. To keep untiringly trusting in the opportunity of a new attempt.

The Ludovico method is a fictitious technique of aversion therapy famously depicted in Stanley Kubrick’s A Clockwork Orange. Oscar Muñoz’s work Método Ludovico is an artistic interpretation of the psychological phenomenon known as classical conditioning, a process initiated by the Russian psychologist, philosopher and physiologist Ivan Pavlov. With this technique, one is exposed to a high physical and psychological aversion to the stimulus he is forced to see.

The artwork consists of a single channel projection, based on a historical film document —Entrega de armas de la guerrilla del Llano, by Marco Tulio Lizarano—, recording the acts of delivery of weapons by the first Liberal guerrillas of Colombia in 1953. The video is projected on a custom screen: a whitish and translucent membrane that is hold tight in place by two small ophthalmic forceps called Blepharostats. These medical devices were used in the treatment of the protagonist of Kubrick’s movie, in order to keep his eyes open and force him to look, without blinking, the images that appear before him. Beside some adjustments in color and contrast, Muñoz has done few alterations to the original material. While contemplating the images, which could be confounded with the recent disarmament of the FARC, the viewer can experience a feeling of deja vu, the sensation of the past repeating itself amidst the menace of broken promises. 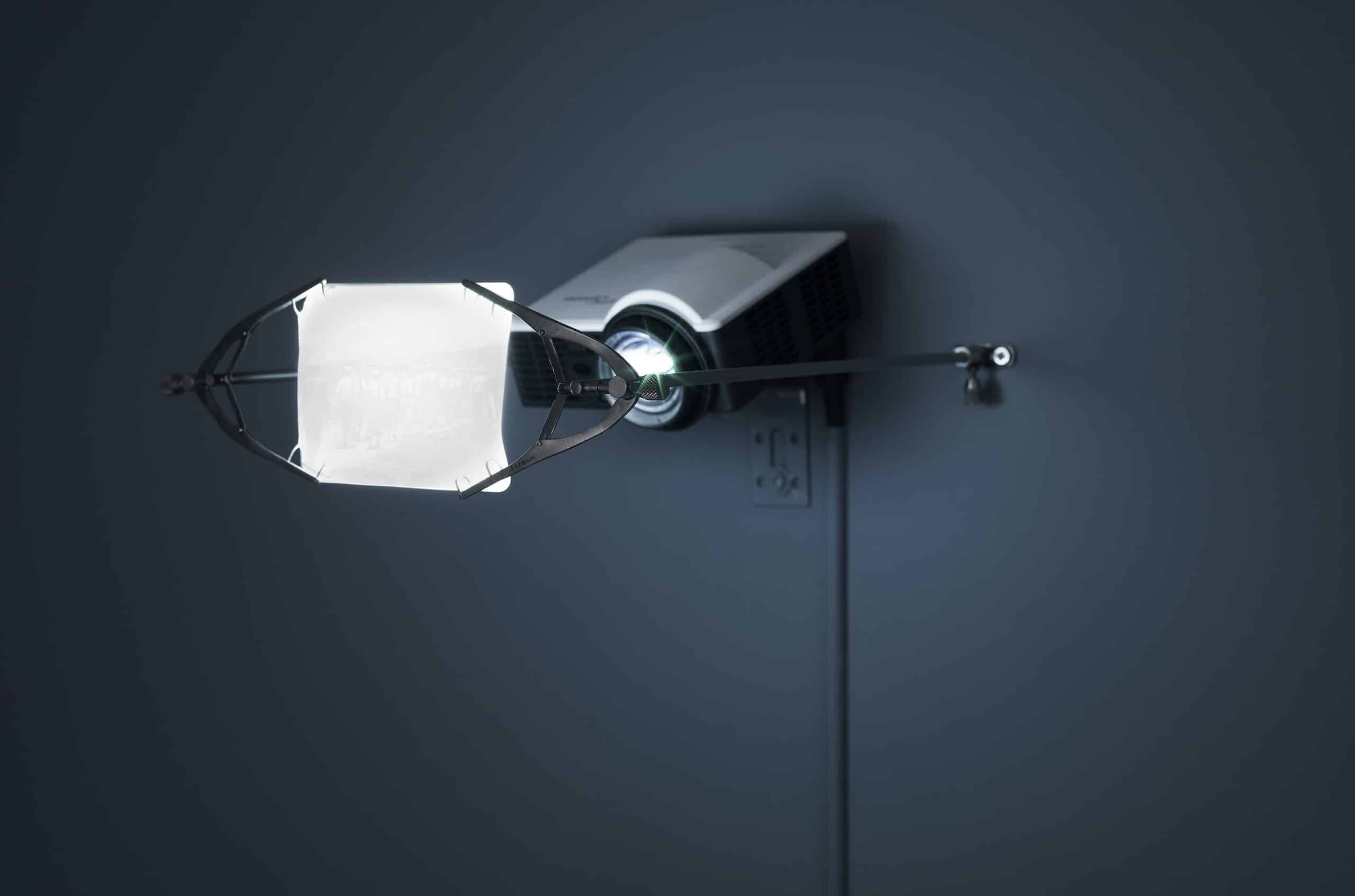 Experimenting with photography and video, Oscar Muñoz has concerned himself with images and their power to fix memory. Editor Solitario II is a video projected onto a table showing a hand placing photographs from court records and newspapers, and portraits of literary and artistic figures, icons from the 20th century. The result is a kind of album in constant modification. The randomness and the rhythm in which the anonymous hand edits the element of our visual culture, seem like a solitaire, a memory game whose image associations are beyond us. The artist here highlights the fleeting, accidental and interchangeable character of images and their superabundance in contemporary society.

“The title references the card game ‘solitario’ (solitaire). Someone who is playing cards, but in this case, they are replaced by photographic images. I am also alluding to the ways in which the past can be thought and reconfigured, as in Aby Warburg’s Mnemosyne Atlas, which explores the idea of our innate memory through art history, or on a more personal level, the structure of family photo albums. In both cases, the order is not chronological, but particular and subjective.” 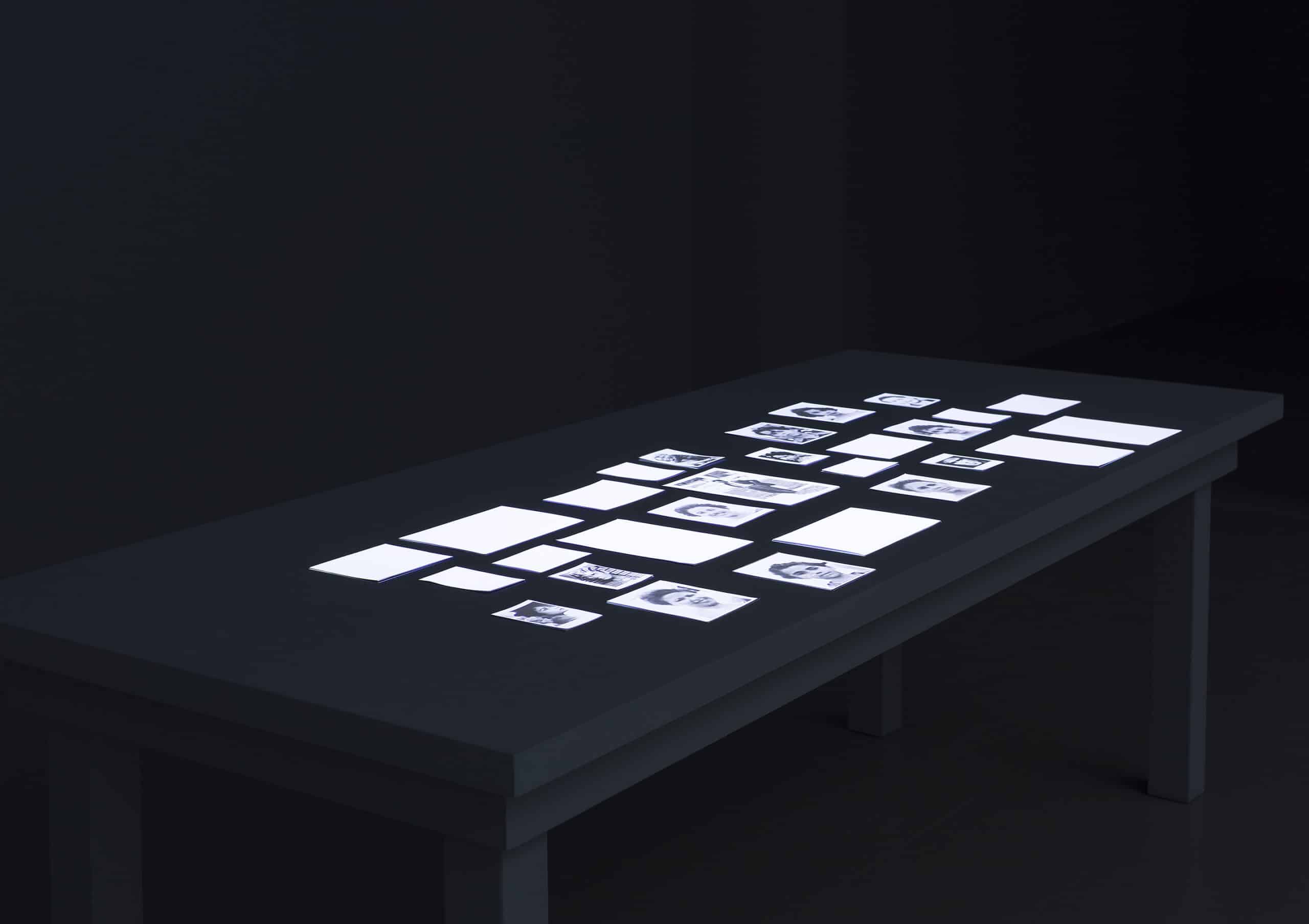 “A hand attempts to outline the identifying features of a portrait, but the medium used (water) and the support (a slab of cement on which direct sunlight falls) ensure that this simple task cannot be successfully carried out. By the time the brush has rendered part of the fleeting portrait, the rest of it has already evaporated, but the hand continues, oblivious, in its ceaseless process, seemingly motivated by an obstinate tenacity. A memorial is an object that functions as a focal point for commemorating a person or event, while the term is usually employed to refer to a monument through which an event or individual from the past is commemorated. The memorial proposed by Munoz is closer to the second sense of the word in that it presents images of individuals condemned to disappear into oblivion, using the on-going existence of the image as a ‘record of offences’ presented to the State by society: extracted from the great body of statistics, these individuals refuse to disappear from history.” 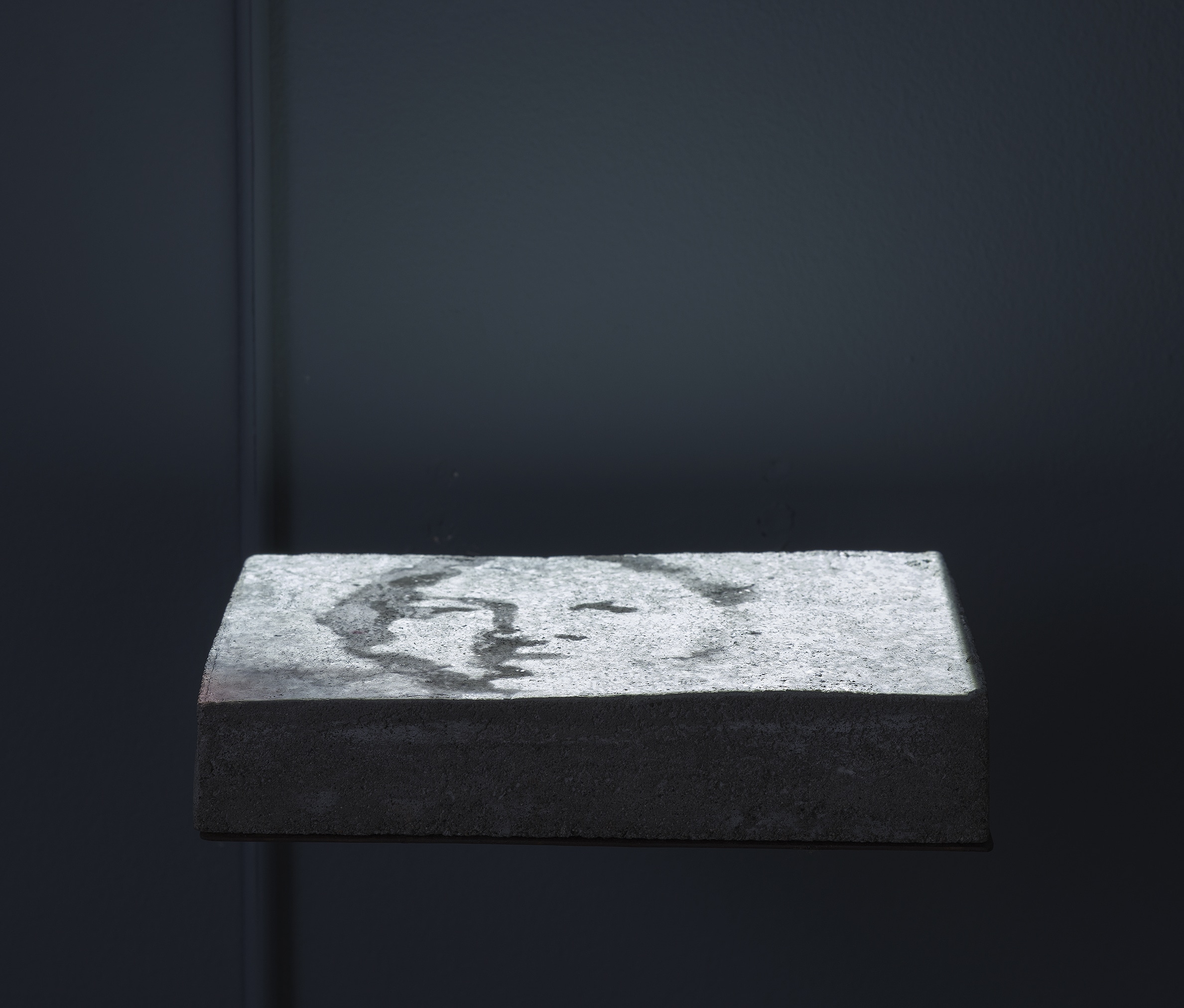 Biografías is a vast artistic journey that has manifested in several photographic and audiovisual projects. It is based in found negatives from anonymous street photographers — known as “fotocineros”— in the city of Cali. They used to take pictures of passers-by and provide them with a reference number to pick their portrait at the photo laboratory. Oscar Muñoz was able to acquire some unclaimed photos before their permanent destruction. Each of the selected portraits was intentionally refocused on the face. The artist developed the image using a screen-printing process, sprinkling coal dust over the surface of the water in a kitchen sink. Then he filmed the portrait, as he emptied the water of the sink, showing how the features slowly mutate and disappear into the movement of the liquid.

The work invokes a cyclic interpretation of personal histories, acting as an archival register of each portrait where the image, although unstable, is reactivated, suggesting an eternal remembrance through a metaphor of memory. The series of recordings that integrates 6 Intentos, were filmed before the main series of Biografías (2002), and are presented without further post-production. The images float on the surface of the water and seem to be detached from the photographic paper as they vanish down the drain. 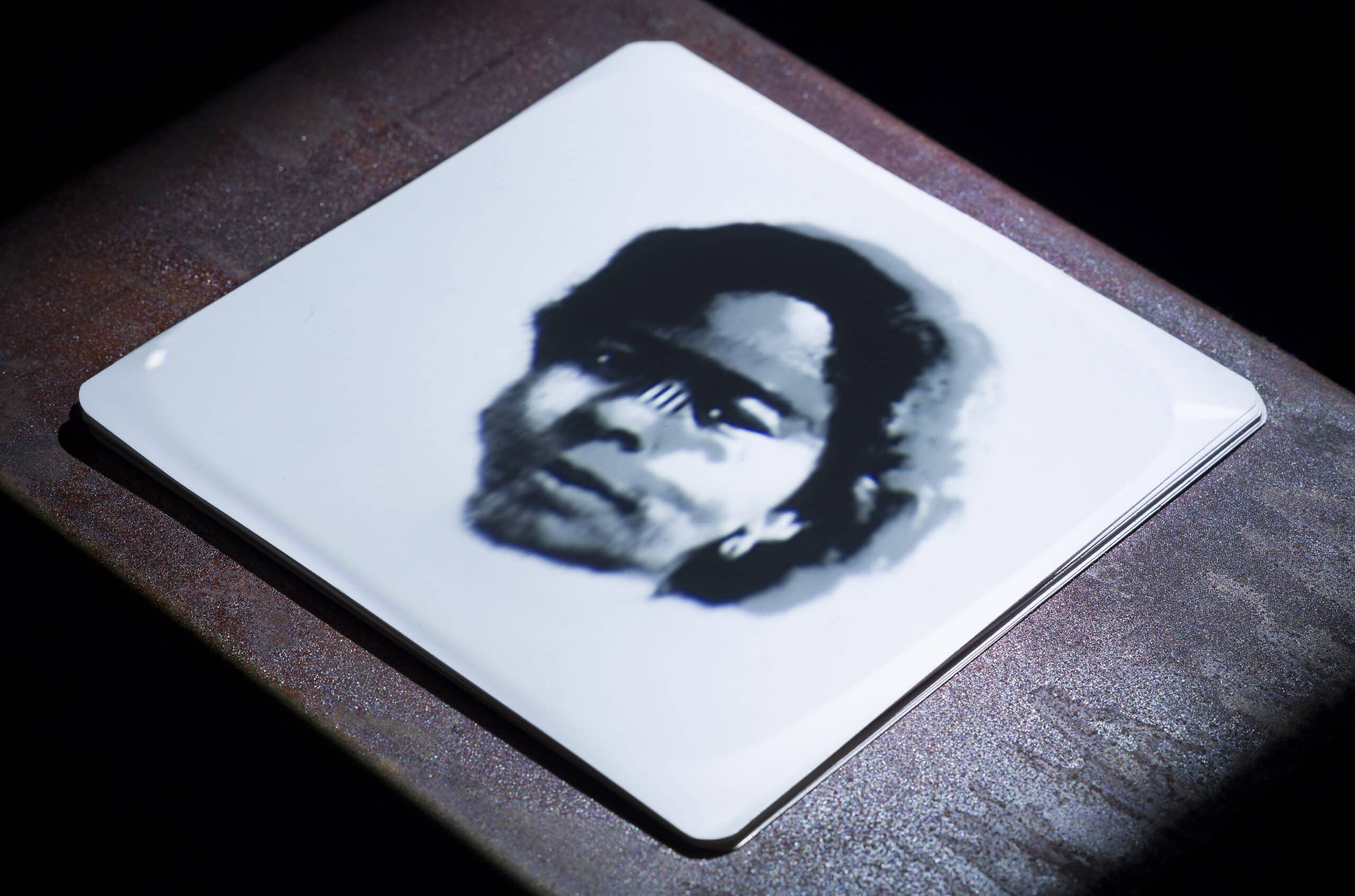 Amongst Oscar Muñoz’s Intentos one can find pieces functioning as an anchor between different bodies of work that are linked through their creative processes. This is the case of Intento del jueves, recorded almost a decade after Narciso (2001) and Lacrimarios (2000-2001), yet profoundly connected to these seminal works.

In this video, a picture is printed in the surface of a water tank using coal dust. Over time, the small particles begin to drop to the bottom, thus reproducing a second image: like a reflexion or a mirror that stays still, immutable and iconic, while its referent wavers in the surface. 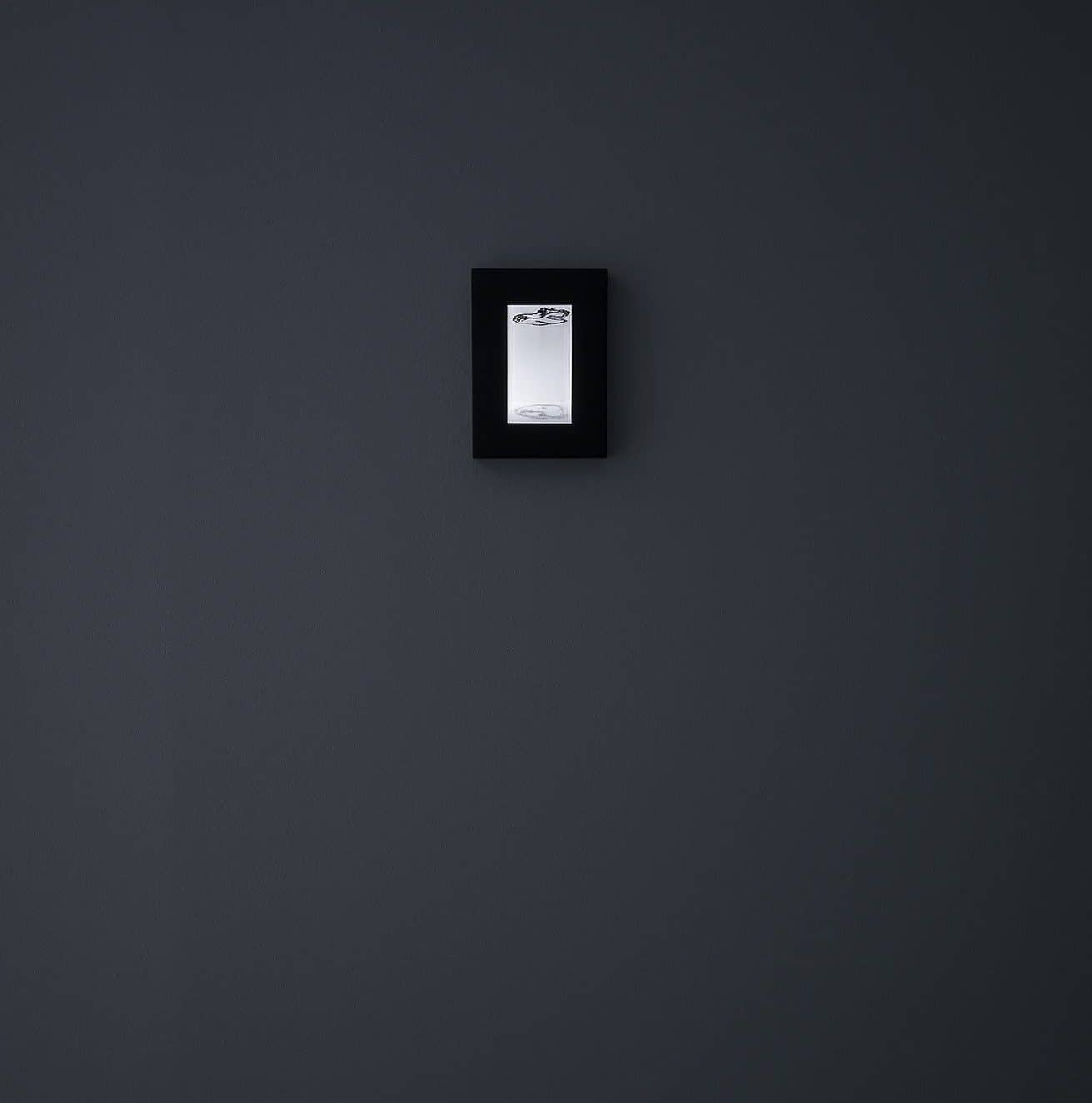