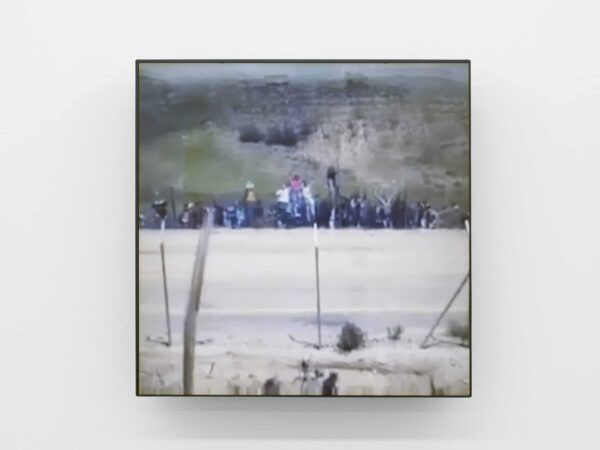 Lawrence Abu Hamdan’s sound and video installation, This whole time there were no land mines (2017) documents a ‘shouting valley’ that lies in the contested area of the Golan Heights, Syria. This stretch of land was annexed by Israel from Syria following a ceasefire in 1967 and was named ‘the shouting valley’, as the area’s topography allows for an acoustic leak across the border. Subsequently, separated families have gathered on either side of the border in order to shout across the divide to each other and remain in contact. Made from found mobile phone footage and audio recordings, the work depicts an incident that took place in 2011 when, for the first time since 1967, the border was breached, and 150 Palestinians protesters from Syria broke into Israeli-occupied Golan Heights.

Drawn largely from the Art Jameel Collection, Artist’s Rooms is a series of solo exhibitions by influential, innovative artists, with particular focus on practitioners from the Middle East, Asia and Africa. These capsule shows are collaborative and curated in dialogue with the artist. Summer 2020 features rooms by Lawrence Abu Hamdan, Taysir Batniji and Larissa Sansour in galleries 1, 2 and 3.